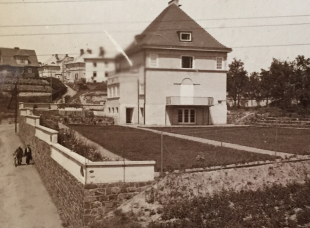 Part I. Growing up in south-east England in the sixties and seventies, I was unaware of my Jewish heritage. Sure, I knew that my father originally came from a place called Czechoslovakia and I had often wondered what language his parents (my grandparents) spoke with one another. I also knew there had been a large house that had been left behind in Czechoslovakia, but more than that… not really.

I no longer recall how, but around the age of 18, I realized my father and his family had been Jews and had fled the Nazis in 1938. The part of Czechoslovakia that they had come from had previously belonged to the Austro-Hungarian Empire and that is why my grandparents spoke German. (In 1918 the Czech state was founded as the Austro-Hungarian Empire fell apart following World War One.)

My grandparents died in 1979 and 1980 and my father in 2005 without us ever talking about events. I never asked my father what it was like as a thirteen year old to leave his country, come to England and learn a new language. And, although my grandfather died when I was 22, I never asked him how he adapted to living in a new country aged 53. But they also never offered to tell me. It was not spoken about; only in recent years have I come to understand why.

But I have a cousin, the daughter of my father’s elder sister – and in 2015 we became pretty obsessed with understanding this unspoken past and the events shrouded in silence. Jules is one year younger than I am and her Jewish heritage had also never been mentioned.

We had some old photos of the house where her mother and my father had grown up, and we knew the name of the town they had come from: Opava. We were both sure that the house still stood. One day in January 2016, after we had decided we must visit the past and the house, I emailed several people listed on the website of Opava’s Town Hall, attaching a grainy copy of a photo of the house, asking if anyone was familiar with it and saying why we were looking for it. For weeks no answer came and then, out of the blue, a woman called Martina contacted me with photos of the house she had taken just the day before. It was a very moving moment and I was suddenly overwhelmed with tears; the past was indeed still there. I was not only touched and moved, an intense feeling of suffering overcame me. It was the deep, heart wrenching all-encompassing Sweet Chestnut suffering. Jules and I spent much time up to our planned visit in April (which Martina kindly offered to organize) simply weeping with one another on the phone. I was surprised and pretty overwhelmed about this sudden intense emotion which was not really mine; it was as if I had entered a ‘memory trace’ of indescribable anguish.

But of course, the Holocaust, the Shoah.

April 2016: After two days in Prague (more on that in a future posting…) we drove to Opava. We arrived early at the house which had been taken over by a state calibration institute. Again, tears flowed as we got out of the car and saw the house for the first time. My grandfather had finished building it in 1929; there was a sign commemorating this outside the entrance gate. The family had only spent nine years there before having to flee to England. We were shown around by very kind and friendly people now working in the house. They had often wondered who the previous owners had been as many loving details had survived the decades. The most touching object was upstairs - the dressing table my grandfather had built for his pretty young wife … it was still there. I was overcome by a sense of her sitting there, young and vibrant, looking out over the wide planes of Moravia as she prepared for her day many, many years ago. Her happiness, her contentment in the wonderful house - it was as if I could suddenly dock on to these ‘memory traces’ too.

We left feeling lighter and somehow relieved although I had fought with tears the whole afternoon and it was a exhausting experience. 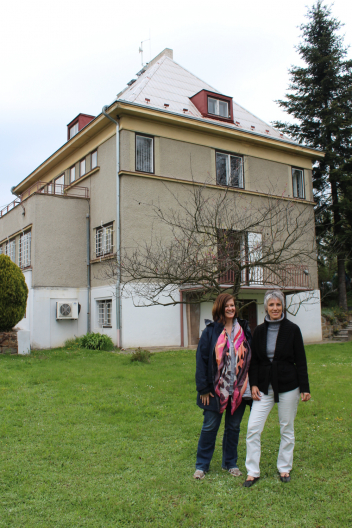 And there the house quietly stood as I turned to look at it one last time as we left: still majestic but a little tainted and time battered. It stood there simply on its mound overlooking the area and watching us people - as it had steadily done for the last 87 years.

My comments Subscribe
Liz 5 years 10 months
I so enjoyed reading about you finding your roots.....it was a fascinating read but very emotional. I am so glad you found the house and that you had your cousin with you. It was really "moving" for me as a reader, and made me wonder how many others must have lost touch with their heritage, as a result of those terribly tough and sad years in Europe.​

Nicola 5 years 10 months
Lovely to hear from you Liz and thanks for your comment...yes, all very moving...am working on part II, which is actually even MORE moving and very sad too...